8 Facts About Chevy You Probably Didn’t Know Before

Chevy has a long and storied history that could span volumes if printed in books. The iconic American auto manufacturer has been in business and thriving since the early 1900s. 1911 was the year that Louis-Josef Chevrolet co-founded the Chevrolet Motor Company in Detroit, Michigan with William C. Durant. Both were well known in American culture, and so the company seemed to be destined for success from the start. Keep reading below for more impressive and interesting Chevy facts.

Starting this list at the very beginning, the Series C Classic Six was the company’s first model offering in 1913. Considered a “Brass Era” car, meaning that it was similar in construction to automobiles considered “horseless carriages.” You can conjure up the image of gleaming brass or chrome fittings and large wooden spoke wheels probably without much difficulty. Unbelievably, the Series C Classic Six had a top speed of 65 miles per hour and had a whopping 40-horse power. In today’s money, the car sold for approximately $50,000!

2.) This Iconic American Car Brand Was Founded by a Swiss Immigrant!

This might not be such a surprise after learning Mr. Chevy’s full name above, but Louis-Josef was born in Switzerland. He and his family relocated to France in his youth where he became interested in mechanics and bicycles. He left France for Canada in 1900 and in 1901 moved to New York City. He later started racing and worked for Fiat and Buick on car design. Which leads us to our next point.

In 1906, a novice racer and recent immigrant to the United States set a World Land Speed record of 117.64 miles per hour. The record was set at a Florida racetrack and Louis was behind the wheel of a Darracq; A racecar of Italian design. The Darracq’s stripped down body, huge V8 engine helped the car, and driver achieve this huge undertaking.

That’s right – the Chevy Suburban has been in continuous production for 86 years with the 2019 model. First sold in 1935, the Suburban will have gone through 13 generations when the 2019 models are sold. This makes it the longest production model of car in production in the world.

5.) That Time Chevy Fought the Germans.

Starting on the first of August and ending sixty-three days later on the second of October, the Warsaw uprising was a particularly violent time in that country’s history. However, the Polish Home Army did get some help from Chevy in the form of a chassis of a Chevy 157 civilian truck. The truck had been built in Poland under license before the war and was transformed with steel plates to become an armored personnel carrier. It was armed with a Soviet machine gun; a resistance underground built flamethrower, and was named Kubuś. Although the direct translation for Kubuś is “little Jacob,” it is also the colloquial name for “Winnie the Pooh” in Poland.

6.) The First Corvettes Had to be Pushed Off the Assembly Line.

Today, Corvette conjures an image of power, speed and wealth. However, the very first Corvettes found themselves a little… lacking. Being the first fiberglass bodied car that the company produced, engineers had not properly considered that the car’s electrical system had not been properly grounded. As a result, the first few Corvettes had to be pushed off the assembly line, as they would not start.

In addition to that, the Corvette’s trademark crossed-flag logo initially had a slightly different look. Everyone knows the checkered racing flag and Chevy logo flag crossed on the hood of the car – it is iconic and instantly recognizable. Before the Chevy logo flag, the Stars and Stripes were initially featured. It was only changed later when the company realized they could not trademark the US flag.

7.) The First S10 Pickup Had an Advertised 39 Miles Per Gallon Highway!

Granted, this was a different time. The S10 came out in 1982 and featured no computer components and no air conditioning. It was also a very small truck with a very small engine. Even though the numbers were tested in a lab under ideal conditions (not quite the same way they are tested now) many S10 drivers reported actual fuel usage numbers pretty close to this. Impressive for a pickup truck in the ’80s. 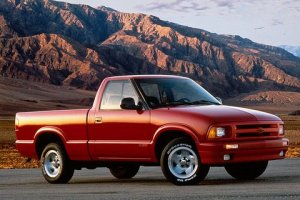 The “bow tie” logo was not always the emblem of the company. Originally, a stylized version of Chevrolet’s name was used but was determined to not have the right fit for the company. The “bow tie” is said to have been an homage to Louis’ parents and Swiss heritage by mimicking the Swiss flag.

About the Author: Simi Valley Chevrolet

Simply fill out the form below...