Despite just having a refresh in 2019, the new 2020 Chevy Camaro has added even more impressive changes. Here’s the latest on the refresh of a refresh.

It’s not every year a car get’s major changes, but it is starting to feel that way with the Chevy Camaro. Just last year, Chevy many several edits to the 2019 model. With the 2020 model year just around the corner, Chevy wasn’t content to rest on their laurels. Even more upgrades are in store for the storied American sports car, according to a report from GM Authority.

Getting a new Trim

In what GM Authority called “a refresh to the refresh,” the 2020 Camaro will see numerous changes and additions. In their report, the car website broke down the dozens of edits coming down the pipeline.

The 2020 update will include a new trim level: the LT1. Merging the body of the LT with the powerfully upgraded engine of the SS, the LT1 provides a nice Goldilocks option right in the middle. It will provide buyers the opportunity to get the beastly 6.2-liter V8 LT1 engine under their hood without paying the premium price tag. The LT1 will retail for $34,995, $3,000 less than its SS big brother. Rumors abound that the LT1 is being unleashed to try and offset a sales slump compared to competition that already provides a cheap V8 model. 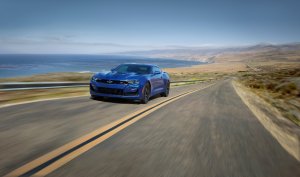 Two new special edition packages will also grace the 2020 Camaro, though they won’t be available at when 2020 model year sales begin.

The second new package, the Redline edition, will focus on adding flashy red accents and coloring throughout the Camaro. If you’re looking for red seat belts, red knee pads, Redline Edition stripes and a black Camaro fender badge with red accents, then the Redline package will be a must-buy. Have we mentioned Red yet?

When it comes to exterior design, the 2020 Chevy Camaro will see some interesting shakeups. First on the list of changes is the removal of two paint options and the addition of a new one. Silver Ice Metallic and Mosaic Black Metallic will be retired, replaced with a new race car-style Rally Green Metallic that has already generated much buzz.

The front fascia will also see some changes, especially on the SS model. Rather than continuing the current black mid-bar design, the new fascia will instead paint it body-color. Even the wheels are getting a major redesign. New 20-in. 5-split spoke polished forged wheels will grace the 2020 model line.

There will be no short supply of accessories in the new redesign. Dark tinted tail lamps will be a new option for the LS and LT models, alongside a new Camaro badge option, also available on the SS. A new bowtie blowout will accompany the 2020 revamp, with the LS and LT models sporting new black front and rear bowties. Available orange- and red-painted brake calipers will be an option for LT, LT1 and SS models. A new decklid-mounted lip spoiler will be added to the collection, optional on LS and LT Coupe models not sporting the RS Package, as well as the LS, LT, LT1 and SS models. 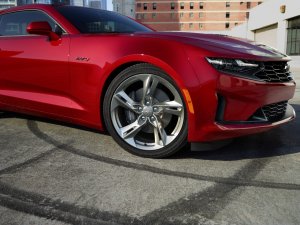 There will be nearly as many changes inside the 2020 Chevy Camaro as there are outside. First on the list is the addition of red knee pads for the LT, 1LT, SS and ZL1. No longer relegated to only the ZL1, all trim models will be able to add an available red seat belt. Intelligent alerts will also be expanded, with Tire Fill Alert included in all models. The Rear Camera Mirror, previously lost when the 1LE Track Package was added, will now stay in place. It will also now be standard to the 3LT and 3LT Convertible.

Material design will also see several shakeups. The Recaro performance front bucket seats that previously required the 1LE Track Performance Package will be standalone options for the LT Coup and LT Convertible. Sport alloy pedals will available on the LT and SS Coupe and Convertibles, no longer locked away behind the ZL1 model.  Controls will be much nicer for the LT and SS Coupe and Convertible; the microfiber steering wheel and suede shifter will be available independent of the 1LE Track Performance Package.

Under the hood, things will be mostly the same as 2019, with a few small changes. Camaro LT models that sport the 3.6-lit. V6 LGX will see a new transmission, as the 8-speed auto of old is being replaced with a new 10-speed. The 3LT will be getting the turbocharged 2.0-lit. I4 LTG engine, while the previous 3.6-lit. V6 LGX will remain an available option.

While the 2020 Chevy Camaro isn’t out quite yet, we have many fantastic 2019 options to choose from at Simi Valley Chevrolet!