Skip to content
Home/blog, Chevrolet/How Do I Get My Chevy Volt Battery Replacement?
Previous Next

How Do I Get My Chevy Volt Battery Replacement?

Chevy Volt Battery Replacement: What Are The Facts?

The Chevy Volt is a range-extended plug-in hybrid compact car that has been
well-received as a practical, comfortable, and efficient commuter car since its initial
launch in 2011. At the time when the Volt first premiered almost 10 years ago, it was the
first mass-produced car on the mainstream auto market that used electric power as its
main energy source—even though the Volt cannot be considered fully electric because
it does feature a backup gas engine.

Despite their rising popularity as of late, hybrid and all-electric cars are still pretty new in
the auto industry and there remains lot of misinformation floating around about them.
For example, many drivers are confused by how the Chevy Volt battery actually works,
how to determine when the Volt’s battery needs to be replaced, and how to go about
replacing the Volt’s battery when it does need to be replaced.

Whether you’re already the owner of a Chevy Volt or are interested in potentially making
your next vehicle a Volt, keep reading to find out the answers to some of the most
common questions about the elusive Chevy Volt battery.

How Does the Chevy Volt Battery Work?

The Chevy Volt comes equipped with a battery pack that allows the Volt to drive 30 to
60 miles using 100% battery power. This battery pack is what gets charged when you
plug in your Volt to charge it.

After the battery pack’s power runs out, the Volt automatically switches to run using its
range-extending gas engine. Depending on the Volt model you have, this
range-extending engine can allow your Volt to drive another 300 to 450 miles before
you need to charge your Volt’s battery pack or fill its fuel tank.

How Often Does the Chevy Volt Battery Need to be Replaced?

There is a widespread misconception that the Chevy Volt’s battery wears out and needs
to be replaced every few years. Fortunately, this is not the case.

In fact, a loss of battery capacity that warrants the need for battery repair or
replacement due to normal wear and tear from regularly driving your Chevy Volt is very,
very unlikely. Reps from Chevrolet have even stated that the only batteries they have
had to repair or replace in Chevy Volts have required repair or replacement due to a
crash or other damage—not because of wear and tear leading to a loss of battery capacity.

How Much Does a Chevy Volt Battery Replacement Cost?

How much it costs you to replace your Chevy Volt’s battery depends on a variety of
factors, including how long you have had your Volt, where you go to get its battery
replaced, etc. 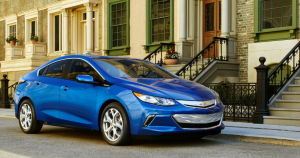 Chevy Volts come with limited warranty coverage that Chevrolet provides on every Volt
they sell. This limited warranty coverage does cover battery repairs and replacements
for up to 8 years from the time you purchase your Volt. Chevrolet’s limited warranty
coverage expires once you have had your Volt for 8 years or once you have driven
100,000 miles in your Volt—whichever comes first. This means that if you have only had
your Chevy Volt for a few years, you should be able to get its battery replaced free of
charge according to the terms of your car’s warranty at any official Chevrolet dealership
in your area.

If your Chevy Volt is out of warranty, its battery repairs and replacements will no longer
be covered and you will have to pay for a battery replacement yourself out of your own
pocket. Unfortunately, there seems to be no clear answer for exactly how much you’ll
have to pay if your out-of-warranty Volt requires a battery replacement. The quoted
prices for a battery replacement in a mid-2010’s Volt range wildly from $3,400 to
$34,000. This wide range of quoted prices is likely because the cost of a Volt battery
replacement depends on the driver’s insurance, the damage to the battery, dealer
markups, and a variety of other factors that are impossible to predict for certain. The
only way to know for sure how much a battery replacement or repair would cost for your
Volt is to take your vehicle to an official Chevrolet dealer or service center and allow an
experienced technician there to assess the damage to your car’s battery and quote you
a price.