The 2021 Chevy Bolt EV is one of the highest-rated electric vehicles available on the auto market for the 2021 model year. This all-electric vehicle debuted as a part of Chevrolet’s vehicle lineup for the 2017 model year. Its 2021 model can travel up to 259 miles on a single battery charge and is available with quick-charging options. Starting at a price of $36,500 with its top-tier model selling for just $41,700, it is also considered to be one of the more affordable high-quality all-electric vehicles available on the current auto market. 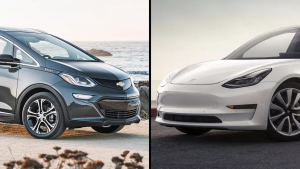 The Tesla Model 3 is another top-rated electric vehicle for 2021. It is a compact sports sedan that is currently Tesla’s most popular vehicle model. The 2021 Tesla Model 3 is renowned for its athletic feel on the road. It is fun to drive, and it has an impressive battery range of up to 353 miles on a single charge. Its base-model starting price of $38,490 is similar to that of the Chevy Bolt EV—albeit slightly more expensive—but its top-tier model will cost you $56,990—which is a much higher price than that of the top-tier 2021 Chevy Bolt EV.

Both the Chevrolet Bolt EV and the Tesla Model 3 are at the top of the all-electric vehicle class for the 2021 model year. In fact, according to Consumer Reports—the reputable nonprofit consumer organization that advocates for consumers by testing products and performing consumer-oriented research—both of these models tied to receive the same overall quality score of 78. This is the highest score that Consumer Reports offered among all of the electric vehicles they investigated for the 2021 model year. This score takes into account the road-test performance, reliability, owner satisfaction, and safety of any given vehicle.

For the 2021 model year, Consumer Reports scored the Chevy Bolt EV at 5 out of 5 for reliability. That’s a very impressive score that should bolster drivers’ confidence in the ability of the Chevy Bolt to serve drivers well on the road for many years without experiencing many—or any—significant problems that require expensive and time-consuming repairs.

How Does Consumer Reports Determine Reliability?

Understanding how Consumer Reports determines the reliability of different vehicles can help you understand what the difference in reliability ratings for the Tesla Model 3 and the Chevy Bolt EV really means.

Every year, Consumer Reports conducts auto surveys using their members as participants. They use the results of these surveys to determine the road-test performance, reliability, owner satisfaction, and safety of each vehicle. After their 2020 Auto Questionnaire was dispersed, survey participants offered responses regarding more than 325,000 vehicles ranging in model years from 2000 to 2020. Each of these 300,000+ vehicle models received between 200 to 300 survey responses from drivers of these cars.

Consumer Reports’ auto survey for reliability asks survey participants to write down any problems with their vehicle that they experienced over the previous 12 months prior to the survey. Participants are asked to note all serious problems—including those covered by their vehicle’s warranty—that were not a result of accidental damage.

Survey respondents are given the chance to both check off one or more of 17 boxes that detail specific vehicle problems—such as problems with the brakes, steering, engine, etc.—as well as write in their own words about any serious problems their vehicle experienced over the past 12 months.

While the 2021 Chevrolet Bolt EV and 2021 tied in overall quality according to Consumer Reports, the results of Consumer Reports’ Auto Questionnaire demonstrated that the Chevy Bolt EV for the 2021 model year is significantly more reliable than the Tesla Model 3 for that same model year.